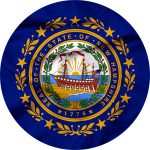 New Hampshire is located in the northeastern part of the country and is bordered by Quebec to its north, the Atlantic Ocean and Maine to its east, Vermont to its west, and Massachusetts to its south.

It was one of the first colonies to become established as an independent government in January of 1776. It was the first state to have its own constitution. Many firsts happened in New Hampshire.

New Hampshire’s enterprising attitude is reflected in the kind of unique festivities it celebrates.
Famous Celebrations in New Hampshire:

If you’re planning to visit New Hampshire, be sure to drop by some of its famous tourist spots like the Castle in the Clouds, Hampton Beach, Lakes Region, Loon Mountain, Isles of Shoals, Mount Washington, Polar Caves, and Santa’s Village. More New Hampshire Flag questions are .

If you’re a proud New Hampshirite and love your roots, then show it. Display a flag in your home to show how much you appreciate your state and your country. Awaken the flame of patriotism, not just for you, but for the younger generation in your family.

Looking for a flag that can do the job for you? Then check out our all-weather U.S. made flags. They are beautiful as well as durable. Made of heavyweight 200 denier nylon, specially treated to withstand the humid continental climate of New Hampshire. Contact us today!
https://www.wikidata.org/wiki/Q759,https://www.wikidata.org/wiki/Q248102,https://en.wikipedia.org/wiki/Flag_and_seal_of_New_Hampshire : NH-FLAG-3×5 : 000000000000 : https://d1atnax1kj6atg.cloudfront.net/wp-content/uploads/nh-flag.jpg