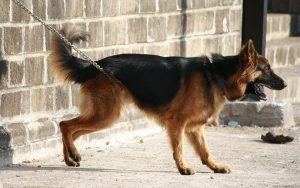 A nonprofit organization in St. Louis is bringing U.S. military veterans and service dogs together. Known as Operation Wolfhound, the organization says that service dogs can help our nation’s veterans better adjust to civilian life.

Statistics show that roughly 10% to 15% of all U.S. military veterans suffer from posttraumatic stress disorder (PTSD), according to the Department of Veterans Affairs (VA). As you may already know, PTSD is a psychological condition that’s characterized by recurring spells of past events that were dangerous or shocking. While anyone can develop PTSD, rates are significantly higher among military veterans because of the grueling nature of combat. Operation Wolfhound, however, is hoping to provide veterans with some form of relief from this all-too-common psychological condition by partnering them with service dogs.

So, how can a service dog help a military veteran exactly? Alicia Miller, one of the organization’s founders, says that dogs trigger the release of feel-good chemicals in the brain, such as oxytocin. When you put a dog, your body responds by release oxytocin and similar chemicals. As these chemicals continue to accumulate, you feel more released and less stressed. The team at Operation Wolfhound believes these effects could suppress the symptoms of PTSD, allowing military veterans to lead a healthier, healthier life.

The general idea behind Operation Wolfhound is to provide military veterans with a four-legged companion that, ultimately, improves their life. Numerous studies have shown that owning a dog reduces the risk of depression, chronic stress and other psychological conditions. If a veteran is suffering from PTSD, adopting a dog may help. These furry companions offer unconditional love and companionship — and that’s something everyone needs.

“Our mission is to provide Veterans with service dogs to help them adjust to civilian life. These dogs work as a buffer to help them integrate with civilian society,” wrote Operation Wolfhound on its Facebook Page.

Not only does Operation Wolfhound find the right service dog for military veterans, but they also do it free of charge. Being a nonprofit organization, Operation Wolfhound doesn’t sell its dogs or services. Led by a team of enthusiastic volunteers who want to help our nation’s veterans, they even offer no-charge training sessions so that veterans can better train and control their new four-legged companion.

If you or someone you know is a military veteran and want to learn more about Operation Wolfhound, you can check out the organization’s Facebook Page here.