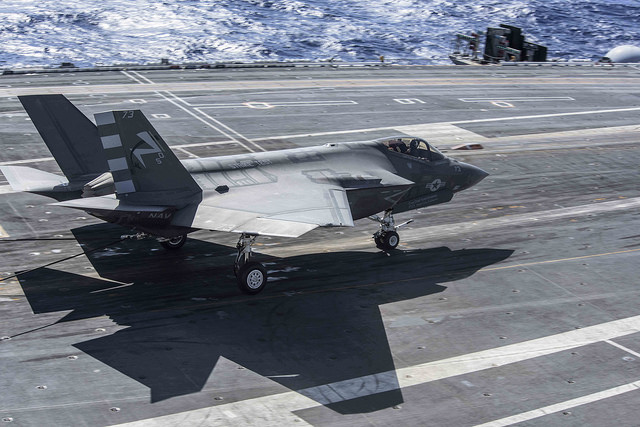 As first reported by the Associated Free Press (AFP), the test flights occurred in the Pacific waters off the coast of San Diego, California, aboard the aircraft carrier USS Nimitz. The pilot of the F-35 was able to successful touch down without incident, guiding the plane so it snagged the arresting wires.

It’s important to note that the U.S. military is actually producing three different versions of the F-35: a standard model; a model that’s designed for vertical take-offs; and an F-35 model that’s optimized for aircraft carriers. All three models are classified as single-seat, single-engine, all-weather stealth fighters that are capable of filling multiple roles. Designed by Lockheed Martin, the F-35 Lighting II is intended to be used for air-to-ground attacks, air-to-air attacks, reconnaissance, and more. After years of extensive testing, the first squadron of F-35 fighter jets was officially announced as being ready for operational deployment.

Landing on an aircraft carrier is no easy task (to say the least). During a typical operation, the aircraft carrier must maintain a crosswind of roughly 30 knots (34 mph) to help aircraft take off from the deck. Of course, many aircraft carriers are powered by their own nuclear reactors, which offers more than enough power for this speed. But this also means that pilots must land on a target that’s constantly moving and tilting while landing. Aircraft carriers can technically move in six different ways: front to back, side to side, up to down, pitch, roll and yaw. Thankfully, the pilot of the recent F-35 fighter jet was able to successful touch down on the USS Nimitz without incident.

In a statement to the press, Lieutenant General Chris Bogdan said the test flights will be used to help further develop the naval version of the F-35 fighter jet.

“We plan on learning a lot during this developmental test and will use that knowledge to make the naval variant of the F-35 an even more effective weapons platform,” said Lieutenant General Chris Bogdan, team leader of the F-35 program.

You can seethe new F-35 C Lighting II fighter jet touch down on an aircraft carrier by clicking the play button above. The roughly 1-minute long video reveals the single-engine stealth fighter coming to a complete stop on the USS Nimitz.

Delivery of the F-35 C Lighting II fighter jet is scheduled for delivery in 2037. 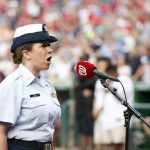 National Anthem Etiquette: What You Should Know 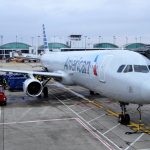 Why Is the American Flag Displayed Backwards on Airplanes?