The state of Wisconsin has its own official flag. It’s been around for well over a century, with lawmakers only changing the design a single time. Whether you live in Wisconsin or a different state, you may recall seeing the Wisconsin state flag. The current design features the state’s coat of arms against a blue background. However, there are probably some things about the Winsconsin state flag that you don’t know. Below are five fun facts about this historic state flag and how it came to be.

The Wisconsin state flag was originally adopted in 1863. At the time, state lawmakers sought an official flag for use during the Civil War. They decided to use a basic design consisting entirely of the state’s coat of arms. Wisconsin’s state of arms, of course, features a sailor and a miner standing next to a badge. Within this badge is several tools for which the state is known, including a pickaxe, hammer, anchor and shovel.

Like many state flags, the Winsconsin state flag has changed over the years. In 1979, state lawmakers revised the design so that it featured the state’s name along with the year “1848.” This new and revised design was similar to the old design. Both designs featured the state’s coat of arms. The difference is that the old design consisted entirely of the state’s coat of arms, whereas the new and revised design featured “Winsconsin” at the top and “1848” at the bottom.

When inspecting the Wisconsin state flag up close, you may notice that it has 13 ingots within the state’s coat of arms. These are actually lead ingots that represent two things: The lead ingots represent mineral wealth, which is a major source of revenue for the state. There’s 13 of them present in the coat of arms because Wisconsin was one of the 13 original colonies of the United States. 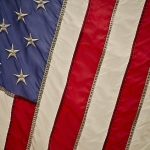 An Introduction to the Flag Resolution of 1777 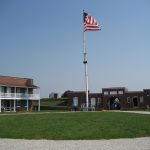