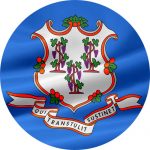 In Connecticut, the law prohibits the disposal of used razor blades. So it’s a puzzle how they dispose of their old ones unless they go into recycling. Connecticut law also states that a pickle can only be officially called a pickle if it bounces. So do you think they also have an official pickle bouncer?

Although Connecticut has some strange laws, many fun things also started in Connecticut. It’s home to the first lollipop machine, first hamburger, first nuclear-powered submarine, first telephone book, first Polaroid camera, first helicopter, and first colored TV. It was also the very first state to issue a speed limit on automobiles (12 MPH) in 1901 and the first to issue permanent license plates to cars in 1937.

The State of Connecticut is named after the Connecticut River which is a major river in the state. It’s given the nickname The Constitution State because of its role during the federal constitutional convention of 1787. But the state has also earned unofficial nicknames such as the Provisions State, The Land of Steady Habits, and the most popular, The Nutmeg State.

Sailors during the 18th to 19th centuries used to bring nutmeg seed on their long journeys and quickly became peddlers of this valuable seed. This is how the state earned their unofficial nickname The Nutmeg State.

It is bordered by Long Island Sound to the south, Massachusetts to the north, Rhode island to the east and New York to the west.

But you’ll get to know more about the State of Connecticut and its locals by the celebrations and festivals they observe in their region. Their official state holiday’s include:

Other festivals that draw out locals to the streets to enjoy food, music, some live entertainment, booths, and other crafts include:

If you want to get into the mood of these celebrations, get your flag and display it for everyone to see. Flying your flag means you’re a proud citizen of this state and of this country. Some neighborhoods even make it a tradition to fly flags on the street to let everyone know that they are united and in a celebratory mood.

Do you have a flag to fly for these fun events? Are you looking for a state flag? We can help you with that. Our US Made Flags are fashioned from heavyweight 200 denier nylon with fibers specially treated to resist chemical and sun damage–a strength that can’t be measured. Contact us today!