Like the country’s other 49 states, Texas has an official flag. It consists of a single white star set against a blue background on the left side along with white and red vertical stripes on the right side. While you’ve probably seen Texas’s flag displayed in front of homes and businesses, you might be surprised to learn the following facts about it.

#2) Served as a National Flag

The colors used in Texas’s state flag have specific meanings. The red stripe, for instance, symbolizes courage, whereas the white stripe symbolizes purity. The blue background on the left side of the flag symbolizes loyalty. The star, on the other hand, symbolizes all of Texas.

#4) Ranked as the 2nd Most Popular State Flag

To say Texas’s state flag is popular would be an understatement. A 2001 survey conducted by the North American Vexillological Association ranked it as the second-most popular state flag in all of North America. In case you were wondering, New Mexico ranked as the top of the list.

Texas’s state flag has origins dating back to the mid-19th century. In 1838, the Congress of the Republic of Texas introduced legislation authorizing the use of an official flag. Just one year later, it was adopted as the state’s official flag. It has since been modified several times, eventually leading to the modern design. Today, Texas’s state flag consists of a single white star on a blue background with horizontal white and red stripes. 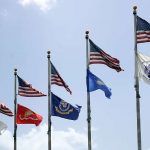