Who designed the Alaska state flag and when was it adopted?

The state flag of Alaska was adopted on July 9, 1927 by the Territory of Alaska and then it was adopted by the State of Alaska on January 3, 1959. The design of the flag has not changed since its original design in 1927. Alaska’s state flag was designed by Benny Benson, a 13 year old Alaskan Native American boy residing at the Jesse Lee Mission Home for Children orphanage in Seward. The Alaska Department of the American Legion sponsored a territorial contest for Alaskan children in grades seven through twelve and Benny’s design won unanimously out of 142 designs. For winning the contest, Benny received a watch with the flag’s design engraved on it, and a $1,000 educational scholarship.

What is the design on the Alaska flag and what does it represent?

The state flag of Alaska consists of a dark blue field with seven small stars and one large star placed upon it. The seven small stars form the big dipper. The blue field represents the Alaska sky and the forget-me-not, which is the state flower of Alaska. The big dipper symbolizes the great bear and strength. The large star represents the North Star (Polaris) and the State of Alaska as the most northerly in the Union. Noteworthy here is that the designer of the State Flag, Benny Benson, a 13 year old boy, looked to the sky for the symbols he included in his design.

How are you supposed to fly the Alaska flag with your American flag? 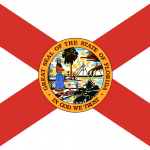 5 Fun Facts About the Flag of Florida