Like many other state flags, the flag of West Virginia has been modified several times throughout its history. The first design, however, was officially adopted in 1905. At the time, the West Virginia State Commission announced the need for an official flag so that West Virginia could be distinguished from other states at the Louisiana Purchase Exposition. This ultimately led to West Virginia’s first official flag, which featured a spring mountain displayed against a white background and a blue border.

The flag of West Virginia is one of a few official state flags that features a two-sided design. Originally, the reverse side featured West Virginia’s state of arms along with its state motto.  In 1907, however, the reverse side was modified to feature a “sprig or sprigs of the rhododendron maximum, or big laurel, our state flower, having blossoms and leaves.”

#3) The Reverse Side Now Mirrors the Obverse Side

You may notice that the modern West Virginia flag now features the same design on both sides. Whether you’re looking at the obverse or reverse side, the design will be the same. On both sides of the flag of West Virginia is the state’s coat of arms encircled in a wreath. At the top of the coat of arms is the phrase “State of West Virginia.” Why did lawmakers decide to use the same design for both sides?  It was reported that using different designs on the obverse and reverse made the flag expensive to produce. Therefore, lawmakers decided to use a single design for both sides.

#4) Only Flag to Feature Crossing Rifles

#5) Has Its Own Set of Rules for Display 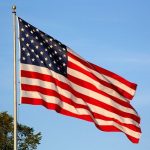 How to Prevent Your American Flag From Sliding Down the Pole 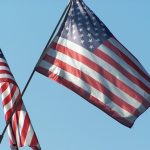 5 Things to Consider When Choosing a Flag Pole