When researching some of the different flags in the United States, you may come across the Michigan state flag. Each state has its own official flag — and Michigan is no exception. Michigan has had an official flag for over a century. While its design has evolved since then, it’s proudly displayed in front of countless homes and businesses throughout The Great Lakes States. Below are five fun facts about the Michigan state flag.

Unbeknownst to many people, the Michigan state flag was originally two sided. The front side featured the state’s coat of arms, whereas the back side featured a portrait of Michigan’s first governor. It wasn’t until 1865 when this design was replaced. Even then, though, the second design retained its two-sided construction. Instead of featuring a portrait of the state’s first governor on the back, though, it featured the United States coat of arms of the back. The third design of the Michigan state flag eliminated its two-sided construction.

The Michigan state flag features two of the state’s great animals: the elk and the moose. They are cornerstone elements of Michigan’s coat of arms. The flag also features the bald eagle, however, because of its symbolism to the United States as a whole. 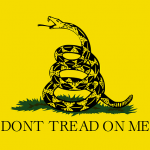 The History of the Gadsden Flag