Where can I buy a Colorado flag?

For a 100% made in the USA Colorado flag that will last, try “Star Spangled Flags”! Their flags are sewn using triple and quadruple stitching to help prevent fraying and unraveling, and are treated to help resist fading from the bright sunshine. They provide free shipping and a customer satisfaction guarantee.

When was the Colorado flag adopted and who designed it?

How am I supposed to fly the Colorado flag with my American flag?

What do the designs on the Colorado flag mean?

The flag consists of three horizontal alternate stripes. The two outer stripes are blue, representing Colorado’s blue skies, with a white stripe in the middle which represents Colorado’s snowcapped mountains, and the production of silver which exceeds other states. There is a circular red “C” just to the left of the center of the flag, which is the first letter in Colorado, the first letter in columbine (their state flower), and the first letter in Centennial (it’s nickname is the Centennial State because it was admitted to the Union in 1876). The red represents the red soil of Colorado. Completely filling the open space inside the C is a golden disk which symbolizes the beautiful sunshine enjoyed year-round, and the precious gold of which Colorado exceeds other states. The red and blue used in the flag, is the same red and blue that is used on our American flag. 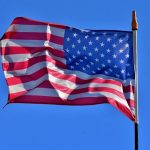 5 Features to Look for in a High-Quality American Flag