When was the Nevada flag adopted and who designed it?

The current state flag of Nevada was adopted in 1991, although Nevada has had four flags in its history. It was designed by Louis Shellback III in 1926 after winning the contest for the design of a new state flag. Since that time there have been discrepancies about the placement of the state name “NEVADA”. In 1991 Legislature finalized the placement of the state name and signed it into law.

Where may I purchase a Nevada flag?

To get a Nevada state flag that has bright, beautiful color and is also sturdy, go to Star Spangled Flags. Their flags hold up strong against the elements and are treated with a UV protectant against the bright sunlight. They also use very strong stitching to help keep their flags from fraying. They are 100% made in the U.S.A. and come with a customer satisfaction guarantee and they also provide free shipping!

How am I supposed to fly my Nevada and American flags together?

What is the design on the Nevada flag and what does it represent?

The state flag of Nevada is cobalt blue with the design in the flag’s upper left corner. At the top of the design is a gold scroll with the words, “BATTLE BORN”, one of the state’s mottos, which testifies that Nevada was admitted to the Union during the American Civil War. Centered below the scroll is a silver star (which represents Nevada) with one point pointing straight up (which represents North). The star and the direction it is pointing, implies that the state was with the victorious Union in the American Civil War. The color silver of the star represents Nevada’s state mineral which is Silver and also represents the wealth of mineral resources within the state. Below the star is the state name, “NEVADA” in a semi-circular design. Nevada is a Spanish word for “snowclad” reminding people of the great peaks of the Sierra Nevada mountain range. Below the state name are two sprays of sagebrush, to honor the Nevada State Flower, also in a semi-circular design.

Why Is the American Flag Called ‘Old Glory?’ 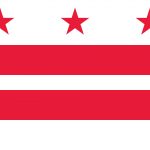 What Is the Flag of Washington, D.C.?