When was the New Hampshire flag adopted?

What are the designs on the state flag of New Hampshire and what do they symbolize?

The New Hampshire state flag displays the Seal of the state central on a field of dark blue. The outermost part of the Seal is a beautiful wreath of laurel leaves, with 9 stars of gold placed at regular intervals. Central on the Seal is the 32 gun frigate warship, the USS Raleigh atop a large rock of granite. The flag of the United States is flying on the stern of the ship. A golden sun with many sunbeams is rising behind a mass of blue water. This beautiful scenery is surrounded by the statement “SEAL OF THE STATE OF NEW HAMPSHIRE 1776”. The wreath of laurel leaves symbolizes fame, honor, and victory, and the nine stars interwoven within the leaves represent New Hampshire as the ninth state to join the Union. The warship represents the glorious history of New Hampshire and its ship-building industry. The American flag represents New Hampshire’s support of United States. The granite boulder symbolizes both New Hampshire’s rugged landscape and the sturdy character of its people. The granite rock also reminds people of the state’s nickname, “The Granite State”. The blue water stands for the harbor of Portsmouth. The year 1776 suggests when New Hampshire gained liberty, and is also the year the USS Raleigh was built.

What is the correct way to fly my New Hampshire flag with my American flag?

Where can I buy a New Hampshire state flag?

For a 100% made in the USA New Hampshire flag that will last, try “Star Spangled Flags”! Their flags are sewn using triple and quadruple stitching to help prevent fraying and unraveling, and are treated to help resist fading from the bright sunshine. They provide free shipping and a customer satisfaction guarantee. 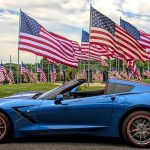