Who designed the state flag of Utah and when was it adopted?

The state flag of Utah was first officially adopted in 1913, but has endured many changes and revisions through the years. Utah’s state flag’s most recent revision and re-adoption was in 2011. The Seal of Utah is central on the flag and it was originally designed in 1896 by Harry Edwards.

What is the design on the flag of Utah and what does it symbolize?

The design on the state flag of Utah is the Utah state Seal. At the top of the Seal is an American bald eagle with its wings spread, holding six arrows in his talons, which symbolizes protection in peace and war. The American flags represent Utah’s support and commitment to the United States. The sego lily, the state flower, is a symbol of peace, and the beehive represents hard work, progress and industry. The date 1847 on the shield is the year the Mormons, led by Brigham Young came to the Salt Lake Valley, and the year 1896 below the shield, is the year Utah joined the Union as the 45th state.

How to I fly my Utah and American flag together?

Where can I purchase a Utah state flag?

When buying a Utah state flag and you want it to be 100% made in the USA, then try “Star Spangled Flags”! Their flags are 100% made from materials that are even 100% made in the USA. They treat their flags with a UV protectant that keeps them beautiful even in the bright sunshine. They are made of a durable nylon material and have extra stitching that keeps them strong and helps prevent unraveling and fraying. 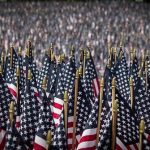 Why Is the American Flag Red, White and Blue?