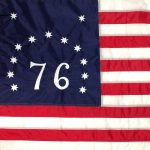 Bennington flag, Made in USA

The Bennington flag is one of the oldest American flags in existence. On the deep blue canton (upper left section) of our Star Spangled Flags Bennington flag lies a large ‘76’, a reference to the year 1776 when the Declaration of Independence was signed and commemorates the country’s struggle for independence from Britain. There are also 13 stars embroidered on the canton, which represent the 13 original colonies. Eleven of the 13 stars form an arc over the ‘76’ with the other 2 stars lying on the upper left and right corners of the canton. The stars have 7 points each instead of the current standard 5 point stars. There are also 13 red and white stripes, the same as our current American Flag has, but the outermost stripes are white instead of red as in our current flag.

All of our Bennington flags are sewn on our 200 denier thick nylon flag fabric. This special fabric is sun-protected and water resistant. The flag also features two brass grommets, a bright, white header, two brass, anti-rust grommets, a deep blue canton with 13 embroidered white stars, lock stitches on the seams, and 4 rows of stitching on the fly end, plus reinforced corners to prevent fraying. And as with all our flags, both materials and labor are 100% made right here in the United States. Add it to your shopping cart today and show your patriotism!

Legend has it that the Bennington flag was carried by troops under General John Stark at the Battle of Bennington near Bennington, Vermont in August 1777. When the British showed up, the General led his troops to battle with the famous cry, “There are our enemies, the Red Coats and the Tories! They are ours, or this night Molly Stark sleeps a widow!” The Bennington flag was said to be created by the general’s wife, Molly Stark herself.

It isn’t exactly known when the Bennington flag was first flown. It was thought that the flag was flown at the Battle of Bennington, August 1777 but after analyzing the flag, it was suggested that the flag may not have been made until the 19th century, years after the famous battle. This evidence suggests that the Bennington flag may not have been present during the battle but could possibly been created to commemorate the American Revolution, then interwoven into the battle’s story through the years. Either way, it doesn’t lessen the importance of the flag. The Bennington flag has come to signify a turning point in the American Revolution and holds a special place in America’s history.

Why does the Bennington flag have white stripes on the top and bottom of the flag instead of red stripes like our American flag?

The white stripes on the top and bottom of the Bennington flag was most likely used to keep with the traditional rules of heraldry, which was the art of flag making.

Is the Bennington flag an American flag?

Where is the original Bennington flag?

The original Bennington flag was donated to the Bennington Museum in Bennington, Vermont.

Where can I purchase a Bennington Flag?

You can buy a Bennington Flag that is 100% made in the U.S.A. from Star Spangled Flags. The Bennington flag is made of a very strong nylon material that keeps it both tough and long lasting. It is treated to dry fast and resist sun and chemical deterioration, which keeps the colors strong against ultraviolet rays in the bright sunshine. It has superior lock stitching and uses 4 rows of lock stitching to the fly end of the flag to prevent unraveling & fraying making it incredibly durable.  The flag has a 100% satisfaction guarantee, and free shipping in the U.S.A.