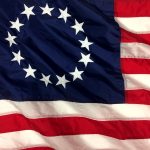 Betsy Ross flags, Made in USA

All of our Betsy Ross flags are sewn on our 200 denier thick nylon flag fabric. This special nylon fabric is sun-protected and water resistant with beautifully embroidered, white stars on the blue field. The flag also features two brass grommets and 4 rows of stitching on the fly end, plus reinforced corners to prevent fraying. And as with all our flags, both materials and labor are 100% made right here in the United States. Add it to your shopping cart today and show your patriotism!

Why are the stars in a circle on the Betsy Ross flag?

The stars are in a circle on the Betsy Ross flag so that the flag would show that no one colony would be viewed above another. It was reported that George Washington said, “Let the 13 stars in a circle stand as a new constellation in the heavens.”

What do the colors on the Betsy Ross flag represent?

There is no record showing the reason the Continental Congress chose the red, white and blue colors. But in 1782, Congress chose these same colors for the Great Seal of the United States and the meaning behind the colors are as follows: Red represents valor and hardiness, white stands for purity and innocence and blue symbolizes vigilance, perseverance, and justice.

It is very possible that Betsy Ross sewed the first American Flag. It is consistent with the clues we do have. The problem is that we do not have a complete, undisputed record of this history. We do have detailed stories handed down from Betsy’s descendants that have beloved charm, but no documentary support. This doesn’t mean she didn’t make the flag, only that there is simply a lack of documentation. Even Ross’s grandson told the Pennsylvania Historical Society that his research in Philadelphia and in Washington, DC, revealed nothing about who designed or sewed the first United States flag. With all things considered, we may never know who made the first American Flag, but hopefully future historians will be able to uncover this unresolved mystery.

Why would Betsy Ross have been asked to make the American flag?

Betsy Ross would have been asked to sew the flag because she was a seamstress and upholsterer. During that time period it wasn’t unusual for ladies with this talent to be asked to make flags. In fact it was common for upholsterers to take up other forms of work during wartime since they were no longer getting their regular upholstery work. They needed to make money in other ways, like making tents, uniforms, and flags for the soldiers.

Where can you buy a Betsy Ross flag nearby?

For a beautiful, 100% Made in the USA Betsy Ross flag, you can purchase one (or more) here at Star Spangled Flags! All our flags are made using a tough nylon material, extra stitching, and treated to withstand harmful UV rays from the sun, to keep them strong and long lasting in the elements.