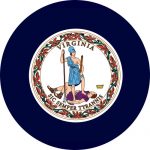 Looking at the State Flag of Virginia is like looking into the past when the United States was at it infancy. It was first used at the start of the American Civil War back in 1861 and standardized during the General Assembly in February 1950. It consists of the obverse of the seal against a blue background. One side shows a female figure personifying the Roman virtue of Virtus to represent the genius of the new Commonwealth. It shows a figure of peace standing in a pose, which shows a battle already won. She is shown resting on her long spear and a parazonium, which is sheathed signifying authority, not combat. Virtus is shown with a bare left breast and Tyranny lies beneath her foot symbolizing Great Britain’s defeat by Virginia. The reverse of the seal shows the blessings of freedom and peace and represented by three Roman goddesses. Virginia is located in the the Southeastern and Mid-Atlantic regions in the U.S., with Maryland and West Virginia to the north, Kentucky to the west, and North Carolina to the south.

Virginia entered the Union on June 25, 1788 as the 10th state and the state was named in honor of Elizabeth “Virgin Queen” of England with the motto “Sic Semper tyrannies” (Thus always to tyrants). The state’s flower and tree is the Dogwood, Cardinal as state bird, American Foxhound being the state dog, Brook Trout as state fish, with Oyster as state shell and they have 2 national forests, 16 state forests, and 44 state parks. More Virginia Flag questions are .

Here at Star Spangled Flags we only use top quality materials in the flags that we make to ensure they last long and that flying them would show one’s patriotism and the huge love for this great nation we call home.
https://www.wikidata.org/wiki/Q1370,https://www.wikidata.org/wiki/Q18993,https://en.wikipedia.org/wiki/Flag_and_seal_of_Virginia : NYL-VAFL-3×5 : 000000000000 : https://d1atnax1kj6atg.cloudfront.net/wp-content/uploads/virginia-state-flag1.jpg,”https://d1atnax1kj6atg.cloudfront.net/wp-content/uploads/virginia-state-flag2.jpg