When was the Hawaii state flag adopted and why is there a British flag in the corner?

The original state flag of Hawaii was originally adopted in 1845. The small flag of Great Britain on the canton of the flag of Hawaii, is to honor Hawaii’s friendship and deep rooted history with the British.

What is on the Hawaii flag and what does it represent?

The state of Hawaii flag consists of a Union Jack of the United Kingdom at the canton (upper left corner). The field of the flag consists of eight horizontal stripes (white, red, blue, white, red, blue, white, red), which represent the eight inhabited islands of Hawaii. The islands are: Hawaii, Oahu, Kauai, Kahoolawe, Lanai, Maui, Molokai and Niihau. The red on the flag represents valor, bravery and sacrifice. The white represents purity, innocence and peace, and the blue stands for vigilance, perseverance and justice. The state flag of Hawaii is a deliberate hybrid of a British and American flag to demonstrate the huge importance Great Britain and the United States are to the history of Hawaii.

How are you supposed to fly the Hawaii flag with your American flag? 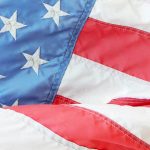 What’s the Required Method for Folding the American Flag?