When was the Maine state flag adopted?

The current state flag of Maine was adopted in 1909. The Maine Coat of Arms is the main feature on the flag and it was adopted in 1820. The flag’s field is blue, the same blue as our National flag.

What is the design on the Maine flag and what does it represent?

The state flag of Maine features the state coat of arms on a national blue field. In the center of the shield a moose is found resting under a tall pine tree in a field bordered by water and woods. The supporters of the shield are a farmer and a seaman. The farmer is resting on a scythe and the seaman is leaning on an anchor. Above the shield on a red banner is Maine’s state motto, “DIRIGO”. Above the motto is Polaris (The North star). Below the shield is the state name “MAINE” on a blue ribbon. The moose represents the rich wildlife of Maine and the abundance of Moose in the state. The pine tree symbolizes the importance of pine trees for the state’s economy and shipbuilding industry. The water and woods represent Maine’s natural resources. The farmer with the scythe stands for the central role of farming to the state. The sailor with an anchor shows the crucial role of seafaring commerce in the state economy. The two men from separate worlds both stand over land and sea, not only using, cultivating, and enjoying the land and sea, but also protecting them. The North star notes Maine’s position as the northernmost state in the adjoining United States. Maine was the northernmost state in the U.S. when the flag was adopted and until Alaska joined the Union in 1949. The state motto, “DIRIGO” is Latin for, “I Lead”, and represents the state’s reputation as a “bellweather”. It gained this reputation because Maine used to hold elections in September, ahead of all other states.

How are you supposed to fly the Maine flag with your American flag?

Where can you buy a Maine flag?

Star Spangled Flag sells a beautiful Maine flag that is 100% made by materials made in the USA! They use a tough material and add UV protection which adds to the longevity of the flag. They also use superior stitching that helps to prevent fraying and unraveling. A big plus is that they provide free shipping! 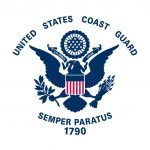 What Is the US Coast Guard Flag?