When was the Missouri state flag adopted and who designed it?

The state flag of Missouri was officially adopted in March 1913. The original flag was designed and created by the wife of Senator Robert Burett Oliver, Marie Elizabeth Watkins Oliver, who was the head of a committee appointed by the Daughters of the American Revolution to look into designing a Missouri state flag. The main design on the flag is the state Seal of Missouri which was designed by Judge Robert William Wells and adopted in January, 1822.

What do the stripes and the design on the Missouri state flag represent?

The Missouri state flag consists of three equal, horizontal red, white and blue stripes. The Missouri State Seal is centered on the flag. Surrounding the Seal are 24 white stars on a blue band. The center of the state seal is a shield supported by two grizzly bears. The shield is divided into two parts. The right part is the United States Coat-of-arms containing a bald eagle with its wings spread wide holding a bundle of 13 arrows in its left talon, and an olive branch with 13 leaves and 13 olives in its right talon. The eagle has its head turned toward the olive branch and in its beak the eagle is clutching a scroll with the motto “E PLURIBUS UNUM” (“Out of Many, One”). Above the eagle’s head appears 13 small stars on a blue field arranged in rows of 1-4-3-4-1. The eagle has a breastplate of a chevron design with alternating red and white stripes, and a blue chief with no stars. On the left part of the shield is a grizzly bear and a silver crescent moon. Around this shield is a belt with the inscription of the motto, “UNITED WE STAND DIVIDED WE FALL”. The two grizzlies supporting the shield are standing on a scroll bearing the state motto, “SALUS POPULI SUPREMA LEX ESTO”, which means, “Let the welfare of the people be the supreme law”. Below the scroll are the Roman numerals MDCCCXX. A helmet with an olive branch on each side, sits on the top of the shield. Above the helmet is a cloud of light blue on which lies one large and 23 small stars. The three horizontal stripes are symbolic of the people of Missouri—the red stripe represents valor, the white symbolizes purity, and the blue represents vigilance, permanency, and justice. The state’s seal appears in the center of the flag, signifying both Missouri’s independence as a state and its place as a part of the whole United States. Placing the state seal on the national colors signifies Missouri as she is, the geographical center of the nation. By mingling the coat-of-arms with the national colors, the flag signifies harmony between the state and the nation. The 24 white stars around the seal represents Missouri as the 24th state admitted to the Union. The helmet and buckled belt on the seal convey that Missouri is a strong state that wants to be free to handle its own problems. The front facing helmet represents state sovereignty. The olive branch on both sides of the helmet symbolizes peace. The grizzly bears signify the size and strength of the state and the courage of her people. The crescent moon reminds us that the people of Missouri can make their future better and symbolizes the “second son” which represents Missouri was the second state formed from the Louisiana Purchase. The larger star and 23 smaller stars above the bald eagle is a reminder that Missouri became the 24th state after solving many difficult problems. The helmet shows the power of the people of Missouri. The motto: “UNITED WE STAND DIVIDED WE FALL” announces the importance to support the whole United States. And the motto: “SALUS POPULI SUPREMA LEX ESTO” is Latin for “Let the welfare of the people be the supreme law”, which reminds us, our state government’s function is to help better our lives. MDCCCXX symbolizes 1820, the year Missouri began its functions as a state although she was not granted statehood until 1821.

How are you supposed to fly the Missouri flag with your American flag?

Where can you buy a Missouri flag?

Star Spangled Flag sells a beautiful Missouri flag that is 100% made by materials made in the USA! They use a tough material and add UV protection which adds to the longevity of the flag. They also use superior stitching that helps to prevent fraying and unraveling. A big plus is that they provide free shipping! 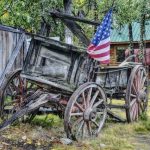