Who designed the Washington flag?

The Washington flag was designed in 1923 by the Washington branch of the Daughters of the American Revolution. The emblem on Washington’s state flag is the Seal of the State of Washington. The Seal was first designed by in 1889 by Charles Talcott based on a painting by Gilbert Stuart . The flag was standardized in 1967 when a law was passed that the Seal must appear correctly on both sides of the flag, although most flags are still made single-sided.

What does the Washington state flag represent and how is it unique?

The Washington state flag is unique in two ways: it is the only flag of the states that has a green field, and it is the only state flag containing the image of an American president. The green field represents Washington as it is known as the “Evergreen State”. It is a shade of green that is generally associated with lush vegetation, that characterizes the state. The 1899 on the Seal is the date that Washington joined the Union, and the image of George Washington on the Seal, pay tribute to the namesake of the state and celebrates his historic role as the first president of the United States.

Where can you buy a Washington state flag?

Star Spangled Flag sells a beautiful Washington state flag that is 100% made by materials made in the USA! They use a tough material and add UV protection which adds to the longevity of the flag. They also use superior stitching that helps to prevent fraying and unraveling. A big plus is that they provide free shipping!

How am I supposed to fly my Washington state flag with my American flag? 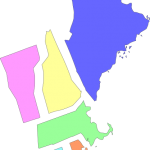 Does New England Have a Flag?