About the Tennessee State Flag’s Design

Tennessee has used other designs for its flag in the past. An earlier version, for instance, featured two slanted stripes in place of the current design’s two vertical stripes. Nonetheless, Tennessee’s latest flag design was officially adopted on April 17, 1905. Since then, the Southern state has continued to use this design. You can now find the modern-day Tennessee state flag proudly displayed at countless homes and businesses in Tennessee.

The Symbolism of the Tennessee State Flag

At the very end of the Tennessee state flag is a vertical stripe of blue, which borders a second vertical stripe of white. When asked about the symbolism of these stripes, the flag’s designer, Colonel LeRoy Reeves, explained that the vertical stripes prevent the flag from “showing too much crimson” when displayed loosely on a pole. Without the white and blue stripes, the Tennessee state flag would look completely red. The stripes break up the flag’s appearance by providing it with white and blue colors as well. 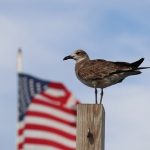