If there’s a storm rolling your way, don’t make the mistake of leaving your American flag on display. The U.S. Flag Code specifically states “The flag should not be displayed on days when the weather is inclement, except when an all weather flag is displayed.” Granted, a light rain shower shouldn’t cause concern. Severe storms with strong winds, on the other hand, may damage your American flag, which is why it’s a good idea to take it down in bad weather.

#4) Not Illuminating at Night

#5) Allowing it to Touch the Ground

Caring For Your American Flag 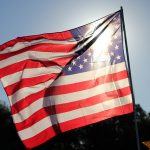 How to Retire an American Flag (the Right Way)