Who designed the New Mexico flag and when was it adopted?

The New Mexico flag was designed by Harry P. Mera and officially adopted in 1925. The Daughters of the American Revolution pushed New Mexico to design a contemporary and unique flag. A contest was held to design the new state flag and Harry Mera was the winner. Mera was an archeologist from Santa Fe that was familiar with the ancient symbols of Native peoples. He got his inspiration from a Zia symbol on an old clay pot that was made by a woman from Zia Pueblo, New Mexico. Mera modified the design and used royal colors, yellow and red, from Spain. The Zia Sun Symbol is the design on the New Mexico state flag.

What is the meaning of the design on the New Mexico state flag?

The New Mexico state flag has a red Zia Sun symbol placed on a field of yellow. Red and yellow symbolize the Spanish heritage of New Mexico as these are colors of old Spain. The Zia symbol has sacred meaning to the Zia Native Americans. Central on the design is their symbol for the sun, a red circle with groups of rays pointing in four directions. Four is a sacred number to them and is seen repeated in the four points radiating from the circle, each consisting of four bars. The red circle symbol for the sun represents the Native American Pueblo heritage of New Mexico and the Circle of Life. The Zia believed that the giver of all good, gave them gifts in groups of four. These gifts are: the four directions (north, east, south, west), the four seasons (spring, summer, autumn, winter), the four periods of day (sunrise, noon, evening, night), and the four seasons of life (childhood, youth, adulthood, old age). All of these bound by a circle of life and love, without beginning or end. The Zia also believe that in the Great Brotherhood of all things, humans have four sacred obligations: they must develop a strong body, a clear mind, a pure spirit and a devotion to the welfare of their people.

What is the pledge to the flag of New Mexico?

Where may I purchase a New Mexico state flag?

For a truly American made New Mexico flag, go to “Star Spangled Flags”. They are built tough and able to withstand sunny weather. They have superior stitching to help with unraveling and fraying improving the lifespan of the flag. They are also a great gift idea as they come in an attractive presentation box which makes them a great gift for friends and family.

How am I supposed to correctly fly my New Mexico flag along with my American flag? 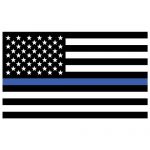 What Is the Thin Blue Line Flag?