What is the pledge to the Mississippi Flag?

When was the Mississippi flag adopted?

The flag of the state of Mississippi was first adopted by the U.S. State of Mississippi in April 1894, replacing the flag that had been adopted in 1861. The flag was subsequently repealed in 1906 but remained in de facto use. When a referendum failed for a new design in April 2001, the state legislature voted to readopt the historic design that same month. In 2000, the Supreme Court of Mississippi ruled that the state legislature in 1906 had repealed the adoption of the state flag in 1894. What was considered to be the official state flag was only so through custom or tradition during the previous 94 years. The flag was officially readopted on April 17, 2001.

Where can I purchase a Mississippi Flag?

For a truly American made polyester Mississippi flag, go to “Star Spangled Flags”. They are built tough and able to withstand sunny weather. They have superior stitching to help with unraveling and fraying improving the lifespan of the flag. They are also a great gift idea as they come in an attractive presentation box which makes them a great gift for friends and family.

What do the designs on the Mississippi Flag represent?

The design on the Mississippi Flag of thirteen five-pointed stars, represent the original thirteen colonies that were united to form the United States of America. The red, white and blue represents the Union as they are the national colors of the United States of America. As of today, the Mississippi state flag is the only remaining U.S. state flag which still depicts the Confederate battle flag’s saltire.

How are you supposed to fly your Mississippi flag with your American flag?

When flying the Mississippi and American flag on the same pole, the flag of the United States must always be at the top and the Mississippi flag should be the same size or smaller. When It is flown on separate poles, the Michigan flag will be to the right of the flag of the United States situating the U.S. flag in the position of honor, which is to the observer’s left of the other flags. 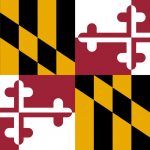 What Is the Flag of Maryland? 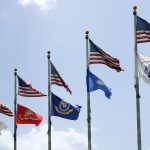 How to Display a Military Flag With the American Flag