What is the pledge to the Virginia state flag?

The Virginia state flag pledge is, “I salute the flag of Virginia, with reverence and patriotic devotion to the Mother of States and statesmen, which it represents – the Old Dominion, where liberty and independence were born”. The official salute to the flag of Virginia was adopted in 1954.

When was the Virginia state flag adopted?

The Virginia state flag was 1st adopted on April 30, 1861, and then standardized by the General Assembly in February 1950. The Seal of Virginia is centered on the flag and was adopted in 1776 and modified in 1930. Four men were appointed to design a proper Seal for the Commonwealth of Virginia. The four men were George Mason, George Wythe, Richard Henry Lee and Robert Carter Nicholas. George Wythe, a signer of the Declaration of Independence, was believed to be the chief designer.

What is the proper way to fly my Virginia flag with my American flag?

What is the meaning of the emblem on the Virginia state flag?

The emblem on the Virginia state flag is the Seal for the Commonwealth of Virginia. Within the Seal is a female warrior, Virtus, the Roman goddess of virtue, who symbolizes the state of Virginia. She holds a spear in her right hand pointing downward touching the earth, and her left hand holds a sheathed spear pointing upward. She wears a helmet, her head is erect, and her face upturned. The female figure represents character, worth, courage, bravery, and military strength of the citizens of the Commonwealth of Virginia. Her left foot rests on the prostrate body of a king who represents tyranny and implies that his power has been vanquished. His fallen crown is nearby representing the end of the sovereignty of Great Britain; he holds a broken chain which represents freedom in his left hand, and the whip in his right hand represents Virginia’s deliverance from British acts of chastisement. Above the head of Virtus, is the word “Virginia”, and below the prostrate man is the motto “Sic Semper Tyrannis”(“Thus Always to Tyrants”), which underlines the strong, relentless message of the early patriots of Virginia. The ornamental border of the Seal is a wreath of Virginia Creeper. The blue field of the flag represents vigilance, truth, loyalty, perseverance and justice. The color white is a symbol for peace and honesty.

Where can I buy a Virginia state flag?

A great place to purchase a Virginia state flag that is fully made in the USA is Star Spangled Flags. Their flags are 100% made in the USA! They are super strong and are treated so they really last out in the bright sunshine. They provide free shipping and come with a customer satisfaction guarantee. 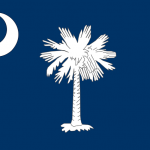