What is the pledge to the Rhode Island flag?

The pledge to the flag of Rhode Island is, “I pledge allegiance to our State Flag, and to the Republic of which Rhode Island forms a part; one Union inseparable, with honor and reverence for both State and Nation.

When was the Rhode Island state flag adopted?

What does the design on the Rhode Island flag represent?

The Rhode Island state flag contains some of the design on the Seal of Rhode Island. The gold anchor is a symbol of hope and is taken from the Holy Bible scripture from Hebrews 6:19. The scripture states: “We have this hope as an anchor for the soul…..”. The thirteen stars surrounding the anchor represent the original thirteen colonies that have declared independence from British rule and formed the United States. Rhode Island is the 13th of the original 13 colonies. The word “HOPE” below the anchor is the motto of the State of Rhode Island and Providence Plantations.

Where could I purchase a Rhode Island state flag?

If you would like to purchase a Rhode Island Flag, try Star Spangled Flags. Their flags are beautiful! The colors are bright and bold and they are made from only materials made in the USA! They are durable and protected from the sun, and they use strong stitching that keeps the flags from unraveling and fraying. They also provide free shipping!

How are you supposed to fly your Rhode Island flag along with an American flag? 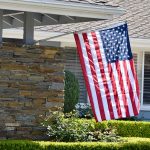 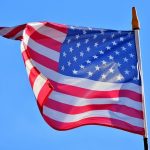