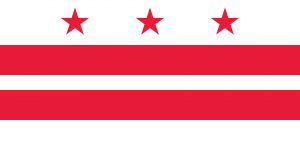 History of the Washington, D.C. Flag

The Washington, D.C. flag has origins dating back to the early 1900s. In 1924, the Daughters of the American Revolution (D.A.R.) petitioned Congress to adopt a flag for Washington, D.C. The bill was introduced by Chairman Reed. Initially, the proposed design consisted of the shield of the coat of arms with a red background and a blue cross. Congress, however, rejected the proposal. Of course, that didn’t stop the D.A.R. from seeking a flag for the country’s capital. For well over a decade, they continued to campaign for Congress for a Washington, D.C. flag.

On Oct. 15, 1938, the D.A.R were successful in their efforts. Congress adopted the Washington, D.C. flag on this date. The design was selected by Congress with the assistance of the Commission of Fine Arts. They didn’t choose the design initially proposed by the D.A.R. Rather, Congress and the Commission of Fine Arts selected an alternative design for the Washington, D.C. flag, which consisted of three red stars at the top and two horizontal bars at the bottom on a white background.

Facts About the Washington, D.C. Flag

Like with many U.S. state flags, it’s unknown who was responsible for designing the current version of the Washington, D.C. flag. Congress and the Commission of Fine Arts selected the design, but the creator of this design remains unknown. The most plausible theory is that it was designed by Charless Dunn. Dunn was an artist who worked for the Chamber of Commerce during the early 1900s. Some reports indicate that he was responsible for designing the Washington, D.C. flag.