While it’s neither a state of the United States nor a sovereign and independent country, Puerto Rico has its own official flag. The Puerto Rico flag has been around for several centuries. Its origins, in fact, are closely linked to Christopher Columbus. Historians believe that Columbus carried the original Puerto Rico flag to the island in the late 15th century. What is the Puerto Rico flag exactly?

The Design of the Puerto Rico Flag

The current version of the Puerto Rico flag features a design consisting of five horizontal stripes in alternating red and white colors. To the left of these stripes is a sideways triangle. The sideways triangle features a single white star in the middle, which is placed over a blue background.

Origins of the Puerto Rico Flag

While the first official Puerto Rico flag wasn’t adopted until 1895, its origins can be traced all the way back to Christopher Columbus.  The Spanish Crowd has appointed Columbus with a new flag to carry to the island. Upon landing on the island in the late 15th century, Columbus hoisted the flag.

Of course, Columbus’ flag wasn’t considered an official design. Puerto Rico adopted its first official design in 1895. During this year, the island’s government adopted an official flag. This initial design wasn’t much different from the modern-day design. It still featured five horizontal stripes in alternating red and white colors, and it still featured a sideways triangle with a white star in the center. The only difference was the color of the sideway triangle. In the modern-day version of the Puerto Rico flag, the sideways triangle is blue. The first design that was adopted in 1895, however, featured an Azul-colored sideway triangle.

Like with many other official flags, it’s unknown who was responsible for designing the first official Puerto Rico flag. Some sources believe it was a poet and journalist named Francisco Gonzalo Marin, whereas others believe it was a member of the Puerto Rican Revolutionary Committee. Regardless, the first design was adopted in 1895, with the current design being adopted in 1952. 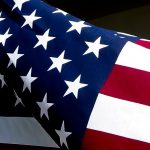 How to Protect Your American Flag From Humidity Damage