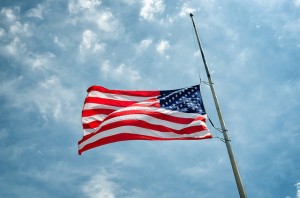 Flying the American flag at half-staff is done as a means of showing respect during mourning. The current President of the United States is responsible for proclaiming this action nationwide, whereas the governor proclaims it for state-wide.

Dwight David “Ike” Eisenhower (34th President of the United States) was responsible for issuing the first proclamation of flying the American flag at half-staff. He made this first proclamation on March 1, 1954, creating a standardized format of dates and times on which the flag should be flown at half-staff for all federal buildings and military bases.

Here are some of the days on which federal statutes provide that the American flag be flown at half-staff:

How to Fly the American Flag at Half-Staff

To fly the American flag at half-staff, you should begin by hoisting it to the top of the staff, at which point you can lower it about halfway between the top and bottom — and area that’s most commonly referred to as “half-staff.”