When was the Kansas flag adopted and when was it first flown?

The flag of the state of Kansas was adopted in 1927. The elements of the state flag include the state seal and a sunflower. This original design was modified in 1961 to add the name of the state at the bottom of the flag. The flag was first flown at Fort Riley by Governor Benjamin S. Paulen in 1927 for the troops at Fort Riley and for the Kansas National Guard.

Who designed the Kansas flag and how was it first used?

The flag of Kansas was designed in 1925 by Hazel Avery. The flag was first used in a Fourth of July parade in Lincoln, Kansas.

What are the designs on the Kansas flag and what do they represent?

The official flag of Kansas is represented by a dark-blue silk rectangle arranged horizontally with the state seal aligned in the center. Above the seal is a sunflower which sits over a bar of gold and light blue. Below the seal is printed the name of the state “KANSAS”. The state seal on the flag tells the history of Kansas and his figures represent pioneer life. The seal contains a rolling landscape with a rising sun, representing the East; a river and steamboat represents commerce; a settler’s cabin and a man plowing a field stands for agriculture; a wagon train heading west exhibit American expansion; Indians hunting American Bison represent the buffalo fleeing from the Indians; a cluster of 34 stars represents Kansas as the 34th state to be accepted into the Union; and the State motto “Ad Astra per Aspera” – Latin for “To the Stars through Difficulties”.

How am I to fly the Kansas flag with my American flag?

Where can I buy a Kansas flag?

When buying a Kansas state flag and you want it to be 100% made in the USA, then try “Star Spangled Flags”! Their flags are 100% made from materials that are even 100% made in the USA. They treat their flags with a UV protectant that keeps them beautiful even in the bright sunshine. They are made of a durable nylon material and have extra stitching that keeps them strong and helps prevent unraveling and fraying. 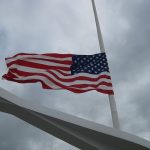