Are you familiar with the U.S. Flag Code? Found in Chapter 1 of Title 4 of the United States Code, it outlines the requirements for flying, displaying, cleaning and handling the American flag within the United States. Many people are surprised to learn that there’s actually a piece of federal legislation governing the American flag. While violations of the U.S. Flag Code aren’t enforced, meaning you won’t be penalized for noncompliance, it’s still proper etiquette to follow this piece of legislation. In this post, we’re going to explore the origins and history of the U.S. Flag Code.

How the US Flag Code Was Started

The origins of the U.S. Flag Code can be traced back to June 14, 1923. Prior to that day, there was no legislation governing the American flag. There was still general etiquette that government entities as well as civilians followed when displaying the American flag, but it wasn’t a federal law. This changed on June 14, 1923, however, when a consortium of over 60 organizations led by the National Americanism Commission of the American Legion drafted the country’s first official guidelines for the American flag.

June 14, of course, is national Flag Day in the United States. Held annually on June 14, it commemorates the country’s adoption of the American Flag, which occurred back in 1777. But 1923 had a special Flag Day. It was the first time a set of official rules were created for the American Flag, thus paving the way for the U.S. Flag Code.

The US Flag Code Today

Even after nearly a century, the U.S. Flag Code is still used to govern the way in which the American flag is flown, displayed, cleaned and handled. And since that time, it has remained largely unchanged. There have been a few modifications to the U.S. Flag, such as the removal of the Bellamy salute, but it’s pretty much the same as the original U.S. Flag Code created back in 1923.

If you’re planning to display the American flag, either privately or publicly, you should follow the guidelines set forth the in the U.S. Flag Code. Doing so ensures that you are honoring the American flag in the best, most respectful manner possible.

You can learn more about the U.S. Flag Code by visiting this link. 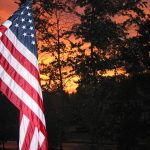 What Is a Flag-Burning Retirement Ceremony?