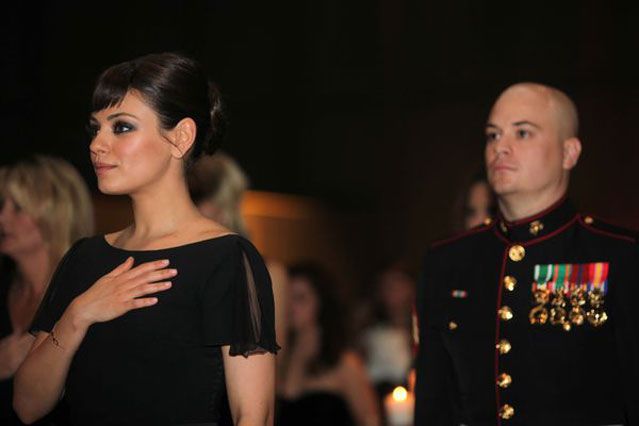 Arguably a big night for any Marine, the Marine Corps Ball is a gala to rival any read carpet. Apparently, there are quite a few stars who agree and are thrilled to have the chance to accompany our men and women Marines to these gala evenings. Check out these fun articles about some lucky stars who had the opportunity to have a Marine date to the Marine Corps Ball.

Like many of our Marines currently on deployment, Sgt. Scott Moore looked forward to the time he would be state side again. He often looked at movie star Mila Kunis because he had her picture as the screen saver on his computer. Looking forward to the Marine Corps Ball, he decided he was going to take a chance and ask Mila Kunis to go with him and he did it from Afghanistan via YouTube video. In this article by Gina Harkins for archive.marinecorpstimes.com, we get all the details on how that video was received and how the date to the Marine Corps Ball with Mila Kunis went. There’s a great shot of Kunis and Moore and a few other well-dressed Marines from the ball and some very funny anecdotes about the night. You’ll want to get the full run down of events and find out how things are between the two now by reading the full article here.

Eyes on the Prize: Kim Kardashian Stuns in Red at Marine Corps Ball…Leaving Her Date Struggling Not to Stare 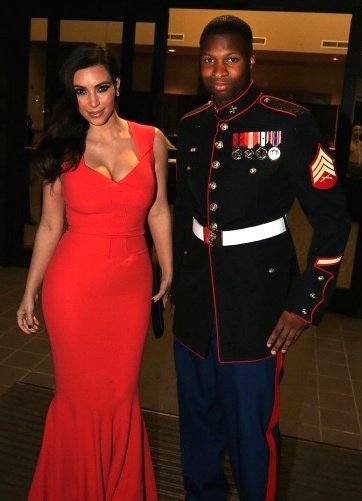 No one can say that Kim Kardashian isn’t a patriot as we see in this article by Chelsea White for dailymail.co.uk. She recently changed her very busy schedule to attend a Marine Corps Ball with obviously awe struck Sgt. Gardiner. Showing up in a low cut and skin tight, red, Roland Mouret mermaid style dress, she was to say the least, a big hit at the ball. While some might suggest she may just be jumping on the patriotic bandwagon, the photos in this story clearly show that Sgt. Gardiner doesn’t care why she came as his date, he’s just glad she did. See all the fun photos and read the full article here.

Not to be outdone by Sgt. Scott Moore, Marine Cpl. Kelsey De Santis decided to do her own video invite to Justin Timberlake and he accepted. In this article and video posted on Huffingtonpost.com, get the low down on how their date went. In addition, you’ll get the reaction from both Kelsey and Justin on their amazing night at the Marine Corps Ball. Both Kelsey and Justin seemed very happy with the experience and you can read and watch all the details here.

Kristin Cavallari Had a “Great Time” at Marine Corps Ball

Apparently YouTube isn’t the only way to get a star to attend the Marine Corps Ball with you, in this article by Zach Johnson for usmagazine.com, we find out that Lance Cpl. Jonathan Burkett inspired Kristin Cavallari to accompany him to the Marine Corps Ball when he asked her via twitter. The couple had a great time and even Cavallari’s boyfriend, Chicago Bears quarterback, Jay Cutler seemed to be happy about the event. Read the full article here.