Overview of the Flag of Los Angeles

The flag of Los Angeles features a colorful design consisting of three vertical notches with the city’s seal in the center. As shown in the adjacent below, the first notch is green; the second notch is yellow; and the third notch is red. In the center of the yellow notch is the seal of Los Angeles.

History of the Flag of Los Angeles

While it’s been around for nearly a century, not many people are familiar with the history of the flag of Los Angeles. In the early 1930s, Los Angeles was hosting an anniversary festival. City officials sought a flag to display at this festival, so they requested the design services of Roy Silent and E.S. Jones. Silent and Jones came up with a flag design, which was then used in the festival. The flag was such a hit, in fact, that city officials adopted it.

Los Angeles, of course, isn’t the only city with an official flag. There are dozens of other U.S. cities with a flag, some of which include Birmingham, Montogomery, Anchorage, Little Rock, Denver, Washington, D.C., Manchester and Jacksonville. Nonetheless, Los Angeles has one of the most recognizable flags. It features three notches in different colors, with the city’s official seal located in the center. What Is the Flag of Iowa? 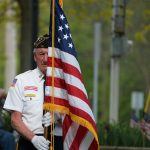