The First American Flags Featured a Variety of Designs

Contrary to popular belief, the first American flags didn’t feature a universal design. In other words, they were created in a variety of designs.  The Flag Resolution of 1777 passed by the Second Continental Congress specifically stated that the American flag should feature 13 stripes red-and-white stripes, and 13 white stripes against a blue background. With that said, it didn’t require a specific orientation for the stars. This led to several versions of the American flag, one of the most prominent being the Betsy Ross flag.

A different version of the American flag was adopted in 1795. It specifically called for the use of 15 stars. Previously, the American flag featured 13 stars, which represented the 13 country’s 13 states at the time. Of course, as new states were added to the United States, the American flag had to be updated to reflect these changes. 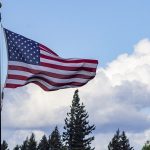 What’s the Proper Etiquette for Carrying the American Flag?