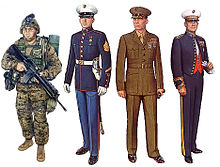 Consisting of 182,000 active personnel and 38,500 reserve, the Marines is a critical branch of the United States Armed Forces. They work closely with ships and other naval forces to project the U.S. military’s power on land, sea and air. But if you’re thinking about enlisting with the Marines, you’ll need to familiarize yourself with its uniforms.

Of all the U.S. military branches, the Marines have the most recognizable uniforms. The Blue Dress, for instance, has been worn since the early 1800s, with little changing since then. The Service Uniform is also widely recognized, dating back to the early 1900s. What’s more, Marines don’t wear insignia patches or flags on their uniforms, nor they even wear name tags. The uniforms are simple, basic and straight to the point — and that’s what makes the Marines’ uniforms great.

There are four “main” uniforms worn by U.S. Marines: Dress, Service, Utility and Physical Training. Shown second to the left in the photo above, the Dress uniform is the most formal of the four. It’s considered the equivalent of the black tie dress code in the civilian world. Also known simply as “Blues,” it’s typically worn for formal events; There are several different sub-types of the Dress uniform, however, including Blue Dress A, Blue Dress B, Blue Dress C, and Blue Dress D, each of which has its own unique characteristics.

The Service uniform, shown second to the right in the photo above, features green and khaki colors. It’s generally worn when attending court, making official visits, visiting the White House, and when reporting for duty onshore. The Marines dress code allows soldiers to wear headwear with the Service uniform, including a green garrison cap or a Barracks Cover service cap.

The Marines Corps Combat Utility Uniform (MCCUU), shown to the far left in the photo above, is the de-facto standard uniform worn by soldiers in the field. It features digital camouflage with a green undershirt and tan-colored boots. There are two different variations, however: one version features woodland camo, whereas the other features desert camo.